Happy Birthday, to You Sir, With Love!

He is an actor, a film director, author and diplomat. In 1964, he was the first black actor to have ever received an Academy Award–that golden staue that recognizes excellence in cinematic achievements, for his role in the film, Lilies of the Field.

In 1967, he starred in the films To Sir, with Love, (we all remember Lulu singing the theme song, right?); In the Heat of the Night (music composed by menopausebarbee uncle Quincy Jones); and Guess Who’s Coming to Dinner–one of the first films of the time to positively depict interracial marriage. This is extremely significant as interracial marriage historically had been illegal in most states of the United States and was still illegal in seventeen states nearly right up until the film’s release. Think about that. All of these brave and brilliant films dealt with race and race relations and were the vehicle for this man to display his extraordinary talent that spiraled him to the apex of his industry: the top box-office star of that year.

His honorary recognitions include being named by the American Film Institute as among the Greatest Male Stars of classic Hollywood cinema; an Academy Honorary Award in recognition of his “remarkable accomplishments as an artist and as a human being”; knighthood by Queen Elizabeth, and the bestowment of the Presidential Medal of Freedom by President Obama. And several years ago, he met me–just a joke! But seriously, just thinking about this man makes me smile. He is truly one of the kindest, charming and most respectful/respected persons I’ve ever had the honor of meeting. And day before yesterday was his 91st birthday.

Take a look at him winning his Academy Award in 1964. You can’t help but smile!! 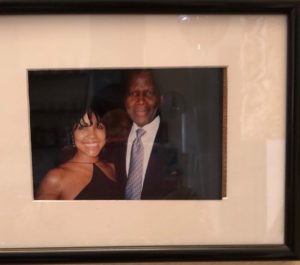