I needed a laugh this week, however, there wasn’t much happening to bring a smile to my face with our country’s unrest and Covid-19 cases still on the rise.  As all of us Seattle Seahawk fans watched our football team get kicked out of the 1st round of the Wild Card playoffs, our anticipated joy of another Super Bowl trip turned to yet another disappointment in an already dismal quarantine year.  So, as I packed up my #12 Blue jersey, I recalled a post that indeed makes me laugh…  and if this story doesn’t make you laugh, you might want to check your pulse and your funny bone!!!!

Mama Tutu (our Mom) is constantly on the roar about being the brunt of our blogs, stories, and tales, but truly, some of our most hilarious moments have involved our Mom, so I apologized to her in advance, but this one I had to share..

Last Friday, I received a call from my sweet girlfriend, Deon Brown, wife of Seattle Seahawk’s Wide Receiver’s coach, Kippy Brown. Deon called with an invitation for us to join her for the final practice at the Seahawk training facility prior to the Championship game against the New Orleans Saints. Deon insisted Tracie and I bring along Mama Tutu, as everyone affectionately calls her, after all- who doesn’t love Mama? Deon warned that although the facility was indoors, it was unheated and extremely cold, and that we would be out in the elements for over an hour. “Please, please, please”, Deon pleaded. “Make sure you all dress warm, and especially Tutu!

Now, I have had my share of frigid climates this year (Iceland Blog 11/18/2013 Every Venture Should Be an Adventure) and I just returned from skiing in Sun Valley (10 Things I want My Children and All of You to Know 1/1/2014), so I was prepared as I pulled out my long johns and began to layer. By the time Tracie, Mama, and I assembled, we had taken Deon at her word and all of us adorned coats and woolens that looked like we had robbed the Zoo that morning!

My choice was a suede and fox fur trimmed old favorite, which is probably ten years old, that I bought when my dear friend, Jeri Rice had her designer boutique in the Fairmont Hotel. I reasoned some things don’t go out of style. Tracie wore a beautiful red sheared mink, a not so oldie, but very goodie and looking at it, we agreed, the coat would not go out of style for a long time. But Mama had taken it to another level as she jumped in our SUV with her custom made French Rabbit full length fur with Italian leather bindings sewn between the pelts. Her favorite furrier, who is now deceased, Gordon, had hand sewn the pelts well over 40 years ago, and let’s just say, this gem of a coat is truly a GrandMenopausebarbee! Mama topped the ensemble off with a rabbit puffed fur skull cap.

I’ve learned never to question Mama’s knowledge for fashion. In fact, I rarely get dressed without seeking her approval. She just has that “it” factor for putting it all together. Remember, we are talking about an 81 year old, who was the former 1st 1950 Seafair Queen, model extraordinaire and fashionista who worked the runway like nobody’s business! But the rabbit coat with it’s full 70’s swagger was NOT EVER COMING BACK IN STYLE!!!! I nicely suggested as I warmed up the vehicle, that it might be overkill, and maybe Mama would want to run back inside and grab another choice. But Mama wouldn’t have it… She snuggled in the backseat and replied, “Deon said it was gonna be C-O-L-D. Now let’s get moving!”

We arrived on the practice field and we all couldn’t help but notice the young players peering over at us. As practice concluded, All American, Notre Dame graduate, Wide Receiver, Golden Tate came over and greeted us. He looked at Mama, smiled and said, “You look like you starred in the movie Coming to America!” 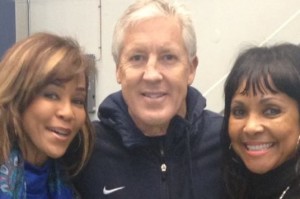 Go ahead an laugh it was a Golden moment and even Mama laughed!