Cascais! Day One Portugal Then and Now

This week as promised, I’m sharing our trip across the pond to Portugal.

Today we celebrate Juneteenth, and I would be remiss to not begin this post by acknowledging the word CELEBRATE in what this day means.  In 1441 the first slaves were brought to Portugal from west Africa. Soon many merchants entered the Portuguese slave trade and hundreds of slaves were being shipped to Europe each year. By 1470 Lisbon had become the leading slave port.  As I walked these historic streets, I imagined my ancestry in the humid, hot climate and how they built upon the land I stood.

Well, it only took me five and a half years after they moved for me to get back there.  I can partially blame Covid for the delay, but aside from missing my dear friends, Gary and Linda madly, a trip to Portugal was not high on my bucket list.

I had been to the Algarve thirty plus years ago with my mom, sister, nephew and former brother- in -law.  In my mind’s eye, a repeat of that excursion was what I envisioned. Admittedly, I wasn’t too excited when Eric pushed for our first post Pandemic out of the country trip there. A windy beach too frigid to swim in, bad coffee, trouble communicating, and rustic roads hard to get around on was what I imagined.  I was longing for a hot beach, resting under swaying palm trees, while being served fruity concoctions of alcohol infused beverages, and reading a great book.  Yup, you read my mind- Necker Island. 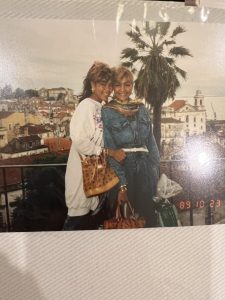 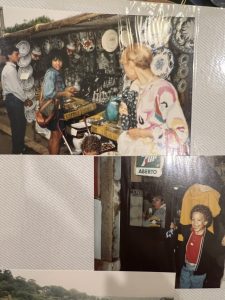 I was, however, eager to reunite with Gary and Linda.  Gary had been my free therapist when they lived in Seattle.  He helped navigate me through my divorce, and subsequent dating relationships.  He and Linda would host incredible SeaFair gatherings and some of the best dinners with close friends, Chuck, Kerry, Tom, Alice and Ron, Kelly and Karen.  I was even invited to Friday night Beer with the Boys.  Gary, like me, has never met a stranger and   I immediately knew I had made the right choice in agreeing to the trip, when Gary, the community appointed “Mayor of Cascais” awaited us at the airport. My husband and I were in for the time of our life. Sir Richard Branson will have to wait!

Gary stuffed his white mini-BMW with our luggage and off we headed to the Farol Hotel. This charming property was perched on the waterfront overlooking the Atlantic coastline. Eric and I got settled- jet lag be damned, and Gary and Linda met us poolside for cocktails.  Gary had recently celebrated a milestone birthday and as he opened his bag of goodies, we were in for a great laugh. In our travel sleep deprivation, Eric judiciously packing per Marie Kondo’s space saving rolling tips had stuffed some of my pink underwear in one of his gifts, a bourbon glass which said Vintage Aged to Perfection.  Not sure if Gary thought it was the Nashville bourbon, drinking glass or my undies which had aged to perfection, but the look on his face was priceless.The four of us headed to Praia Grande for dinner at a restaurant named Bar do Fundo. I was in at the name alone!  Linda, knowing that I am a finicky eater had even reached out to my sister to see if my palate had expanded. I don’t think I ever order direct off a menu.  No CHEESE, no red meat, no, pork is not the other white meat, sauce on the side, well done please!    I was in luck as Portugal is known for fish which I love.  Eric was thrilled as Octopus (the one fish I am not a fan of oh that and the Portuguese staple sardines) was on the menu as well.  The first night, as the windy ocean air kicked up and we enjoyed Portuguese wine, I settled on a local favorite, Bacalhau, which is a Portuguese word for cod – dried and salted.  Washed down with some Portuguese wine (very tasty I might add), and the entire meal with wine and a few cocktails for the four of us was approximately $100 Euro. I looked at Eric and said, aren’t you glad I picked this?

He should watch my Octopus Teacher- he won’t! 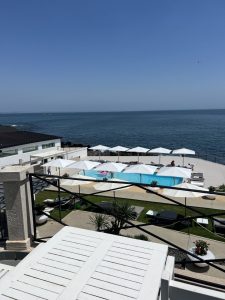 View from our room at Hotel Faro 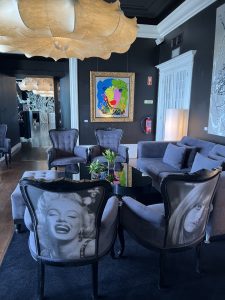 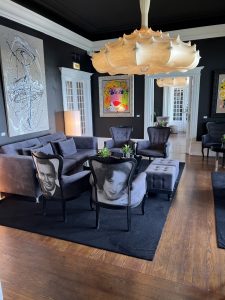 Loved these signature chairs in the Faro Hotel Lobby